The Players in the Game of Automation

Good writing is often prescient: able to speak to both a modern audience, and an unknown audience who will later scroll through the text. Yet, there is some measure of solace to be gained when you know that you are the intended audience in a timely fashion, rather than a timeless one. So with that as a means of introduction, let’s begin a journey together and discuss the players, with their foibles and their virtues, on the playing board of Document Automation.

An oath: a solemn vow to carry out one’s duty. Far more grandiose than the language currently in circulation: offer and acceptance, however no less binding than the terms we affix to our agreements and no less costly when a failure of adherence can have wide ranging consequences. Those who administer such oaths are no longer knights and nobles bequeathing their charges with ceremony and steel, but I daresay the resolve held by those we send to retain acceptance is equal, all things considered.
Who are these modern Oath-Takers?

On the most basic level, an agreement is a promise entombed in a medium affixed by the seal of those bound to carry out its terms. Well, not quite so basic, but fairly straightforward to understand. The parties to the agreement are bound to carry out such tasks described within. Thus, rather than a vow or sworn words, our agreements capture the extent of the duty owed and the price of failure.

Accordingly, the Oath-Taker must be the administrator of such an agreement. No longer is the grant of a vow limited to a knight in the field or noble in the court. Each individual may be empowered to take oaths and affix a seal on behalf of themselves or their organizations. Document Automation takes this egalitarian age one step further.
By allowing users to select from automated templates, document automation platforms ensure that the terms of the oaths are consistent with the requirements of the organization (compliant!) and the process of drafting is fast enough to ensure the agreement is signed before the Hand that signed it is removed from the service of the throne. For these Oath-Takers, document generation is a simple as filling in the required deal information and clicking generate. With built in integration with eSignature platforms, the contracting process has never been easier.

A battlefield is a dance of swords and spears where those sworn to each side declare their rights through an exchange of sweat and steel. A negotiation is much the same, although often with much less steel. While often adherence to terms is often a matter of the size of the kingdoms in conflict, sometimes battles must be waged when terms come into conflict.

Who are the Deal-Makers?

Negotiation is a complex task with each combatant working for the interests of not only themselves but their greater cause as well. Bards have sung of those among us gifted with silver tongues capable of wading through the mire of negotiation and rising without so much a speck of mud. However, those individuals are few and far between.
Again, the intervention of technology has leveled the playing field for the users of document automation platforms. Playbooks allow users to quickly and easily identify terms that are out of organizational tolerance and tools like Leaflet’s DraftLive allow users to use all of the components of automation while simultaneously working with the document in Microsoft Word.

Deal-Makers can leverage document automation to reduce the complexity of the negotiating process and clarify to separate clear easy wins, from time wasting arguments. Automation allows every party in the transaction to have immediate notice of changes, targeted delivery of that notice to the most interested parties, and an easy to follow path to resolution based on pre-configured workflows and data analytics.

The Keepers of Tomes

Documents live and die as all living things. They adapt and thrive, multiply and wane. At some points, they are shelved and locked away until the wisdom they have stored within is again called to the light of day. Those who maintain these brittle beasts are well away of the complexity, ambiguity, and utility of their paper wards.
Who are these Keepers of Tomes?

In the modern context, author have traded scrolls for hard drives and quills for keyboards. But the work for both the ancient and the modern remains largely the same. Collect, record, transcribe, and store. Whether collecting the stories of battle and conquest, or the terms of a transaction, authors are responsible for ensuring that the information is captured accurately and recorded clearly on the medium. Documents are purpose-driven instruments. A document that is inaccurate, or incomprehensible is unable to fulfill the purpose for its creation.
It is with great faith that we entrust these authors to carry out their charges. However, as we ask more of these warriors of the word, sometimes accuracy is lost in exchange for volume. This need not be the case.

Authors benefit the most from document automation. By leveraging the forms that serve as the basis for the majority of their transactions, or by leveraging their clause libraries to take the best language from a number of transactions, authors can create and update automate templates that accurately capture and utilize the terms at hand, while providing unprecedented generation speed.

My friend, I fear our time together is at an end. Take the lessons in these words and find these champions within your organizations. When empowered with document automation, your team will achieve new heights of glory and shake the very firmament of your organizations. 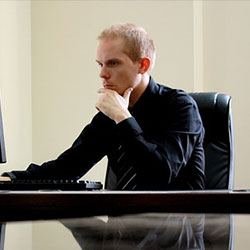